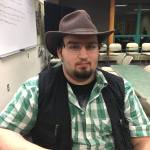 I arrived at Perseverance Theatre a minute or two late. The lights were still on. There was a woman towards the front of the seating area with several bags, a Styrofoam container of food, and, what alerted me that she was part of the play, an umbrella. I quietly took my seat, a little lightheaded; there was a cloud of vaporized fourth wall floating about the room. It would only grow thicker. The woman, and according to the program her name is just Woman, was arguing with somebody in the front row about her assigned seat. That might have worked a little better if it wasn’t Pay-as-You-Can night, but there’s no way the script (let alone the actors) could factor in those sorts of variables.

She eventually found her seat, and the most aggressive audience participation was over. I took a few breaths, and started taking notes.

The lighting was also on-point, very quick and reactive, and always subtly guiding the eye. There are great lightning effects, which featured mostly in the beginning of the play. The costumes were also very awesome, down to Jason’s sandals (I’m jealous). All-around great work in the technical areas.

The play is inspired by/adapted from/features a performance of the ancient Greek tragedy Medea, which is about the titular sorceress seeking vengeance on her husband, the famous hero Jason, for arranging to marry the princess of Corinth, which would result in her having to leave Greece. Long story short, she murders her and Jason’s two children, and rides on a chariot given to her by her dad, Helios, to Athens with the corpses of her kids. It’s…about what one might expect from a Greek tragedy. I haven’t seen or read it myself, but I imagine it’s pretty good if we’re still putting it on and adapting it two-and-a-half millennia later.

I can’t go into the plot of Not Medea too much without spoiling it, because the heart of the comparison between the Woman’s life and Medea’s life isn’t revealed until the last five minutes, but what I can tell you is this: over the course of the play, the boundary between the play the Woman is trying to see and the play that we’re watching becomes thinner and thinner (which is well signified by the Woman slowly dressing in more and more of Medea’s clothes), occasionally bleeding together so much that the Chorus calls the Woman out on it once (“Why are you talking to them?”). There are a number of speeches, about, among other things, why infidelity is bad, why Medea is kind of awesome, why you should never reproduce if you haven’t already. We get to hear about the Woman’s job, we get to listen in on a few of her phone calls with her daughter, and, heck, we even get to see a…stimulating scene between her and Jason. It’s a close look into her life and psyche, and her actress, Shelley Virginia, does an incredible job (I’m pretty sure she never made a mistake, and since this was the preview night…wow).

The other two actors were wonderful, too. Enrique Bravo, who has recently played Sweeney Todd, Leo Irving in Vibrator Play (if memory serves; I know I’ve got a copy of the program somewhere in my office…), and, I guess a couple years back, Brick in Cat on a Hot Tin Roof, was great as Jason. He certainly looked the part, and is very believable in his line delivery and posture as a not-so-bright guy who somehow managed to get his hands on the Golden Fleece. Cate Ross also did a great job as the Chorus, although it was a little strange how she also seemed to be one of Medea’s boys and maybe also one of the Woman’s daughters in a flashback?

…which brings me to the negative aspects of the play. Sometimes the transitions between Woman and Medea were too quick and without signification, making the play occasionally hard to follow. The fourth-wall obliterating nature of it, too, struck me as an odd decision, as I’m used to seeing those sorts of shenanigans in things like Deadpool and late ‘90’s sitcoms for teenagers, as opposed to intense dramas. My biggest problems were the speeches (the most memorable of which was definitely the “don’t ever have kids” one), because the play was otherwise strikingly naturalistic. Heck, the Woman’s cellphone even rings.

Overall, though, it was a good play, and I certainly don’t regret seeing it. I’ve come to expect greatness from Perseverance Theatre (certainly better than most of the plays I saw in Florida as a youngster; apparently larger budgets directly correlate with more obvious technical mistakes), and I wasn’t disappointed. I give it five-and-a-half tears out of seven.