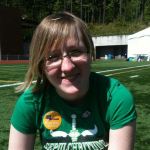 BY KAYLYN HASLUND
For the UAS Whalesong

With the all new All Gender bathrooms having been brought up in last issue, I was able to get in touch with Title IX coordinator Lori Klein, who was happy to talk about the situation and give some information.

Kaylyn Haslund: This is about getting information out there, at least information to the students about where the bathrooms would be, what this would mean, and how this is going about?

Lori Klein: There are a number of single stall restrooms across campus that have already been designated as unisex and that signage will remain in place. So, in our efforts to identify optional restrooms, the single stall units need to be more broadly shared. However, the staff in the Mourant building and the library staff are going to designate some multi-stall bathrooms as “all gender” bathrooms, with gender signage, instead of unisex, which, we’re excited about. That’s kind of more definitive. Unisex is so utilitarian. . .With what I’m learning, gender neutral is still not as broad of a statement as we can make about recognizing that there is a spectrum of gender. So we kind of like the “all gender.” But I was at gender neutral a couple weeks ago and so I’m learning. So, this will be an opportunity for us to all speak from kind of the same place with this designation. We’re doing this in partnership with facility services. Lower level Mourant and we’re not sure if- I think it’s going to be upper level library, by the circulation desk.

KH: That’s what I was hoping, was the upper level library, because I know that one isn’t as used as the one’s out in the main Egan building and downstairs library. Because I know those ones are used much more.

LK: So, we, they’ve just given me some specs to look at for signage, because we also want to designate a couple things. They all have to have Braille in order to designate and they should designate accommodated spaces. The larger stalls. And I would also like them to designate if there’s a changing station in there. But right now the signs don’t indicate that. So we could do some supplemental signage.

KH: That would be really good, especially for, even just… single fathers. Because I know that was a complaint about the male bathrooms is that there are no changing stations.

LK: We hear a lot of complaints during the summer, when we have the big community events and there’s dads with a crying baby and a diaper bag saying, “Where do I go.” So, I think there’s going to be multiple benefits from designating some multi-stall stations. Many of the female multi-stall stations now come with changing stalls, that men can access, which is great. Not to mention, going through identity changes and identifying as a gender as they currently can’t walk in that bathroom. So I’m excited about that. My understanding is that once we finalize the spaces, they push the button on the order, it will take about a month for the signs to come in and then we’ll have to figure out how quickly they’ll install. So, we’ve got, by the end of the month they’ll push the order button. So then we’re talking installation somewhere around after spring break and or the beginning of April. Which is a little late into our semester, but…

KH: But, it’ll still be a good change to see in the summer and the fall.

LK: Something we can absolutely celebrate too for the end of the semester.

KH: Especially for incoming students for fall or returning students who, this has been a long time coming for them.

LK: The staff in the Mourant building have been super supportive of this change for a while and we will leave the upstairs bathroom as gender specific. And we will post signs everywhere, where someone can find an all gender space they want. Or where they can find gender specific.

KH: That was one of my questions. As that was a concern someone has approached me with. Is, well how are we going to know? Well, there’s going to be signs to send it out there?

LK: Well, we’ll have to figure out, in addition to the all gender signage, we’re going to have to create some laminated signs that we put up. That probably my office will coordinate. I don’t know that we’ll ask facilities to do that. But it will simply say for example, with Egan: Gender specific bathrooms located in the classroom wing and lower level library. And then for instance downstairs Egan it will say: All gender bathroom located upstairs. Mourant building has less community events, there’s access sometimes during the summer. But it’s student use. And then I think there’s interest in seeing how this goes and then doing the classroom wing and having one bathroom be all gender.

KH: That would be, that would be really good. Because we have a growing community here, that it would help a lot.

LK: I have no hesitation designating the Egan classroom wings, but we decided that this being… With the exception of classes, Mourant building is the most used building on campus for students. So, we thought it be great to try it out, I guess. Especially the multi-stall… The multi-stall issue, it bothers people. It throws people.

LK: There will still be options. Facilities has been really supportive of the issue, they had some questions and concerns they’ve iterated. One of the concerns, and not necessarily from facilities is, safety. But there is absolutely no evidence that all gender bathrooms are any less safe than gender specific.

KH: Yes, because one of the highest rated places, where violence does happen, is in the bathrooms. And that’s typically in gendered bathrooms. So, I think have the all gender bathrooms might help. Because I know for many people, going to the bathroom is very scary for them.

LK: And I just think, if we can start out with these bathrooms being in spaces, where the staff. The day to day users are supportive and comfortable with using it, it’s going to become nonissue. It’ll take time. The library’s been great. Hannah Wolf-McPike and I have been working on this. And we though we heard that the library wanted to designate their multistall bathrooms as all gender. So, we call them up and they were like, “Oh no, we have some single stall bathrooms. Down the hallway, it’s kind of towards the staff offices. And we thought we could put up a sign for students to know they could use them.” It was very… And we were like, “Oh, we were under the impression that you want to change some of your multi-stalls into all gender bathrooms.” And they said, “Huh. Well, let us talk about that.” It wasn’t even on their radar and they’re now going to have the second location on campus. Which is pretty exciting. . . I was actually super surprised at the amount of single stall bathrooms on this campus when they sent me the list. But I had no idea.

KH: That was another issue. A lot of the students don’t know that there are these spaces. So I have one other question. Have you been met with any hesitation?

KH: Good, that’s something I’ve been worried about. Because, it’s also a concern on other people’s mind.

LK: No one has been adamant against it. People have said, what about community events? Where you’ve got a mix of age and gender. And frankly, community events are a different thing. And we, yeah we have a lot of people on campus and parents are responsible for the safety of their children. And should there be an incident, we as a campus will respond to that. But no one has said to me, I don’t support this or I would stand in the way of this. If you want to have a space, where you’re not forced to choose by your action of walking into a space, deny your own identity… If you’re forced to walk across campus to do that, that’s not equitable situation. So, we’re bringing some balance. And we could be doing more, but this is so much more than we currently have.

KH: What do you hope for in terms of student reaction? What will it achieve in terms of the student?

LK: First of all, my hope is, that our students who are this gender identity journey, whether they’ve found it or not. I want them to feel like they have more equitable bathroom space. And that they feel that this is the right step in creating a more equitable environment. But, even broader than that: that this is embraced by the entire campus community, and that everybody understands that they have options, that we’re respectful of all choices. And to have this become our new normal.

Currently here is the list of the all gender bathrooms on campus: